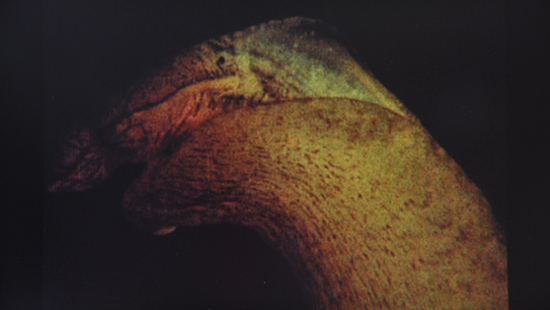 THE URPFLANZE (PART 1)
Review of Melanie Jackson's show at The Drawing Room, London.

Sounds of mechanical clicking and white noise lead me up into the gallery, where I encounter a cluster of makeshift tripods under the wooden eaves. Each structure supports a strange, stone-like form - largely spherical but with spikes and protuberances these might be alien fruits or fragments of lunar rock. Striking shadows are cast by these gnarly shapes and, heightened by the uncanny sound and the flickering of an electric light, the space resembles a scene from a German Expressionist film, or perhaps Dr Frankenstein's laboratory.

'The Urpflanze (Part 1)' presents the first stage of Melanie Jackson's artistic investigation into relationships between industry, science and plant forms. The project is inspired by Geothe's notion of Die Urpflanze, the archetypal plant he believed harboured the model or Proteus for all future plants. Through sculptures, videos, drawings and texts, Jackson explores this idea in relation to transformation and genetic modification processes that underlie the work of contemporary plant scientists. The show speaks of possibility, imagination and the potency of technology and nature.

Particularly arresting are three giant papier-mâché gourds sprawling on the gallery floor. Familiar forms fantastically mutated, Jackson concedes references to Cinderella – I think of Jean Painlevé's 1972 film Acéra, a study of hermaphrodite molluscs in which tiny marine creatures seen through microscope lenses appear as monumental as sea lions. Like Painlevé's pioneering art-science studies, Jackson's sculptures are ambiguous and disorienting, challenging our sense of scale they reveal to us new and startling image-worlds.

A projected animation is the source of the flickering light and ominous sound in the room. The video presents an agitated inventory of every plant Jackson saw in the year leading up to her show. Blazing colour images of leaves, fruits and thorns appear on screen in rapid succession - each visible for just enough time for us to register its passing. Rhythmic flashes generated by the fast cuts recall the original photographic exposures, reminding us that these are views as mediated by technology - a 'different nature', as Walter Benjamin had it.

Within this exciting test bed Jackson's one drawing seems a misplaced part. Alongside the futuristic sculptures and dynamic animation, the meticulous, graphite rendering seems tentative and awkward. But perhaps this is precisely her point – to present the sketch as the prototype artwork, a delicate seed that has yet to metamorphose into its true and final form.