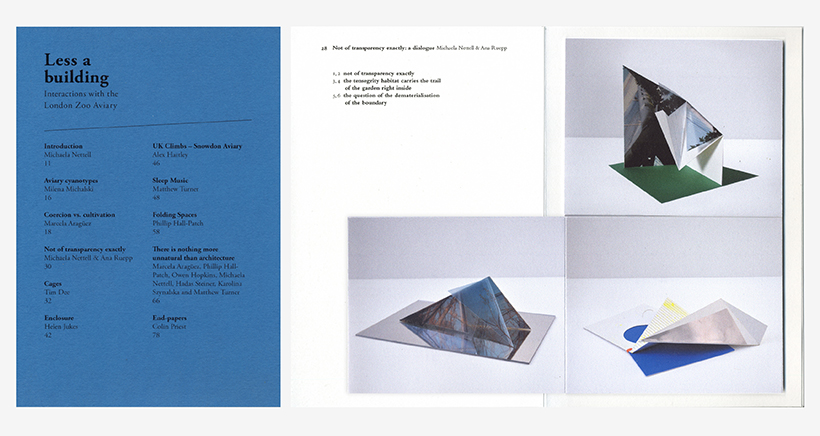 "The aviary was less a building in the conventional sense that a set of spatial possibilities created by an inherently flexible structural system."
**Owen Hopkins, Mavericks: Breaking the Mould of British Architecture, 2016

Less a Building invites a group of artists and writers to respond to the London Zoo Aviary, a Grade II* listed structure designed by Lord Snowdon, Cedric Price and Frank Newby in the 1960s. These interactions are brought together in a book, framed by the transcript of a roundtable between 6 architects and academics that took place in summer 2019, material from the Cedric Price and Zoological Society of London archives, and excerpts from existing literary works that reference the aviary. The research coincides with a major refurbishment of the ZSL site that marks a pivotal moment in its 55-year history.

A polyphonic arrangement of artworks, texts, conversations and archive documents, the project explores the aviary's renowned tensile structure: dynamic, convoluted, bold, threatening. It considers its immersive and sensory qualities, which have deepened over time as structure and surrounding vegetation have entwined. It unpacks its inherent paradoxes of permanence/plasticity, transparency/opacity, openness/enclosure; and evokes gestures of folding, unfurling and flight. It poses questions around cultivated habitats and curated landscapes, and asks what the aviary has come to represent in architectural, zoological and environmental/posthuman terms. The work as a whole offers a set of interconnecting and open-ended readings of an important piece of design that is itself porous, shifting and reactive to its users, both human and avian. 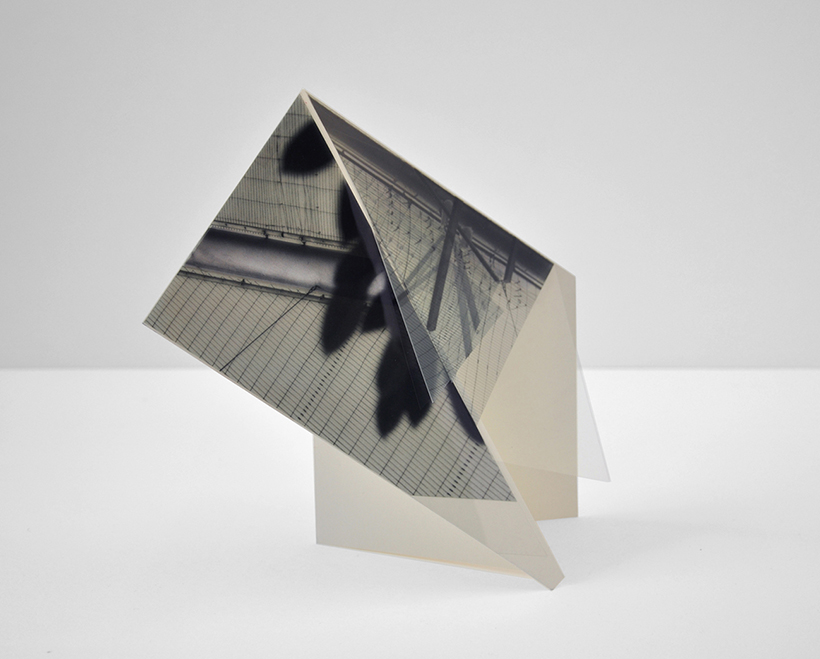 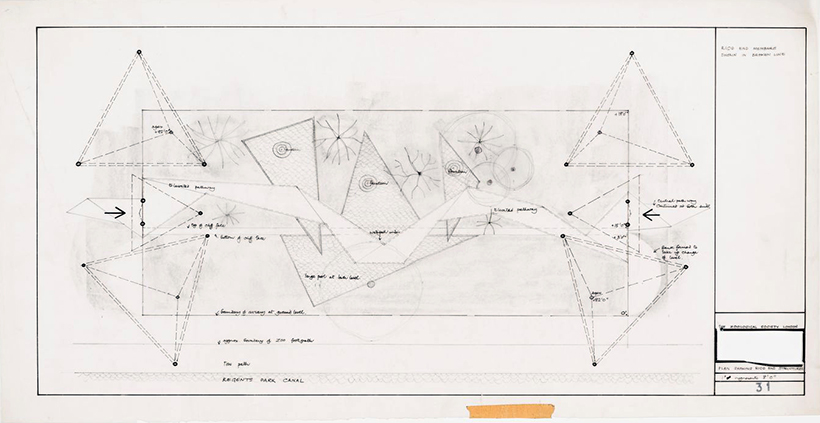 "Habitat for Price was not a replica of place but a site that harbored the interactions of all shades of participant ... As such, Price was essentially unconcerned with aesthetic cohesiveness because meaning for him did not reside in the qualities of an object per se, but was continually constructed through the varied perceptions of those who engage it. The work was left open to be completed by its users. Thus the abstraction of the "natural" features of the habitat was not a formalist gesture but part of a framework which allows interaction to happen. Cliff, ramps, plants, and cage represent no particular known or imagined habitat but a habitat waiting to be.
**Hadas Steiner, 'Birds of a Feather' in Charissa Terranova and Meredith Tromble (eds.), The Routledge Companion to Biology in Art & Architecture, 2016 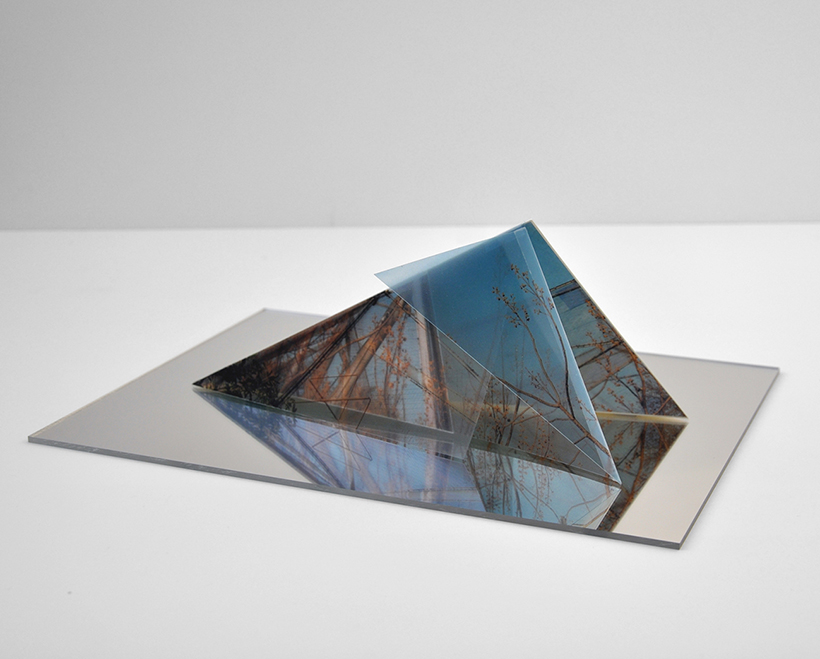 [PH-P]  It's been many years since I've visited, but I always remember the smell. For some reason, emerging into that space and really becoming so aware of the multi-sensory experience of the sound and the smell and the sense of connection to the weather.

[PH-P]  At a really concentrated level, yes. There was a physical reaction to it. I remember withdrawing, and having to acclimatise myself to being in a completely different environment. Which feeds into this question of cleanliness and maintenance, it almost verges on the notion of the other. That sense of being an embodied experience, an architecture of embodiment, is very interesting. It immediately gets me out of trying to understand it from an intellectual perspective. When I was there I couldn’t really see it as a diagram built, but much more as a feeling-based experience.

[MN]  It's very immersive. It feels quite unique within the London Zoo, you get a very particular experience when you enter into that enclosure compared to others. Maybe it is that combination of sensory triggers.

[MT]  I think it goes back to the location as well – you can be just walking past on the road and some people don't really know it’s there and they wonder what the sound is, it's a very strange experience. It's interesting that you should mention weather as well, the mesh did change. So at night you couldn’t really see it so sometimes if you were walking past you could hear these exotic sounds and it would look like there was no barrier there. And then if it was really cold in the winter and it would freeze, the transparency of the mesh would change as well.

[MN]  That was quite an important design consideration wasn't it, to make the mesh large enough that it wouldn't ice over. You were saying you'd find that quite a beautiful proposition actually, imagine that! if it were an ice crystal. 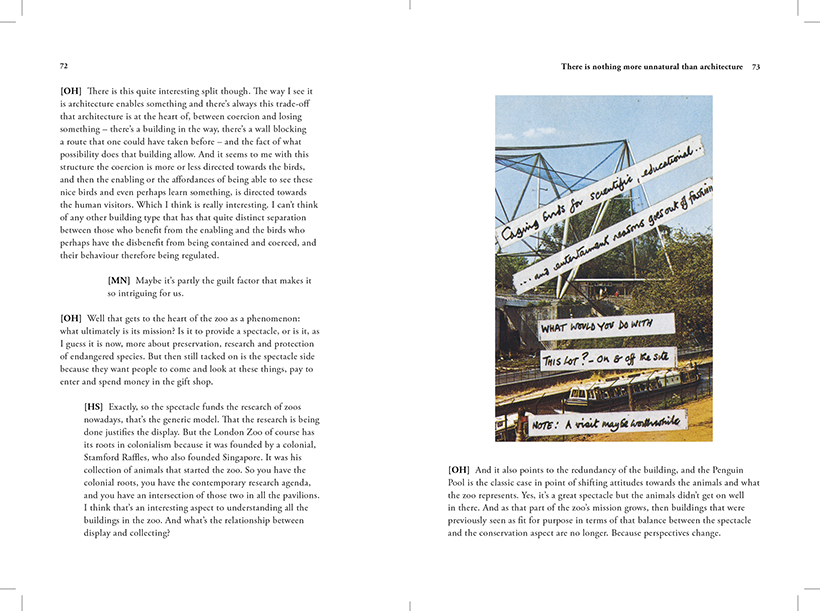