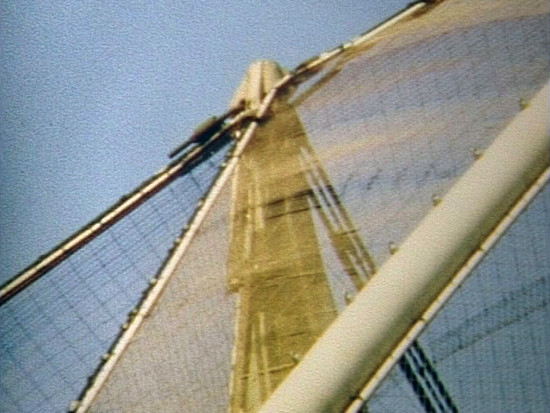 "Nobody in Britain had tried this mode of structure on such a scale before. It enabled a light, see-through effect in which the distinction between inside and outside is blurred."
**britishlistedbuildings.co.uk

Short film and accompanying series of sculptural, print and collage works inspired by Cedric Price's visionary design for the Snowdon Aviary at London Zoo. The film is composed of long, static shots that look upwards to the aviary's striking, tubular skeleton and the peafowl, egrets and gulls within, capturing the changing light on the aluminium and the fluidity of the birds' movements against the rigid geometry of the frame. The glass sculptures, prints and works on paper explore the aviary's transparent, tetrahedral structure, playing with shape and form in a way that confuses or conflates real and imagined space and draws attention to the flatness of the photographic image. The project is part of an ongoing body of work concerned with the framing of landscape by/within man-made geometries, relationships between camera (2D) and physical (3D) space; and the visual and poetical associations between Modernist architectures and their surroundings.