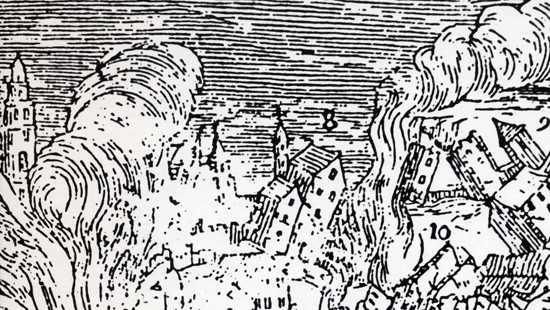 An oversized hardback inscribed in old style serif type with a Diderot quote on scepticism as its epigraph, Gusmão + Paiva's latest exhibition catalogue-cum-pataphysical treatise is a nod to the philosopher's original Encyclopédie. But replacing the frontispiece engraving of Truth parting the clouds with her radiance is one of the city of Lisbon falling under tumultuous skies into the abyss of the great earthquake of 1755.

It is a dizzying descent indeed through the Portuguese duo's Teoria (that's not so much out of this world as orbiting it endlessly) by way of critical texts, citations from a vast sweep of philosophical and literary works from Goethe to Zhuang Zhou to Shakespeare, circuitous anecdotes, comic pen-and-ink sketches and absurdist puns – all serving as possible, though equally likely improbable, explication of the artists' 16- and 35mm films, represented here as sumptuous colour scans that amplify the materiality of the celluloid.

Gusmão + Paiva's project celebrates the analogue – the sheer substance of Teoria... matches that of the nineteen whirring projectors in Papagaio, their recent Camden Arts Centre show – through a process of analogy that is as beguiling as it is beautiful. Frying eggs are either galactic or cellular depending on the glasses you're wearing, lifting a hat from a bald head lays the mind bare, a suspended ostrich egg is an eye and a lunar eclipse, a turtle extending and retracting its neck a grotesque birthing, a candle-dipping machine spaghetti and falling rain and thrusting phallus, and on...

Until – "it seems the text has finished just like it started", the artists quip in their typically self-deprecating 'micro-epilogue', following which an epilogue-proper ends on an excerpt from Walter Benjamin's Protocols, recalling his attempts to order a meal while on hashish in Marseille. There is a sense, as when emerging from the darkness of Papagaio, that this has all been a mind-altering dream. Or, like the magician's classic tablecloth trick, Gusmão + Paiva shake the foundations of what we think we know of the world, while somehow leaving everything in its place.