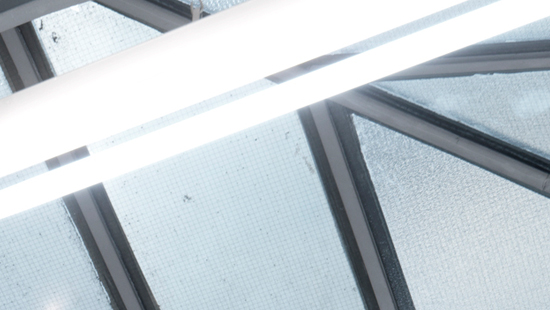 Hilary Lloyd's Striped Man rewards a patient gaze. Five large-scale projections – arranged in a diptych on one basement wall and in a U-shaped trio on another – evolve slowly to reveal greyscale photographs of a suited figure. Cropped, rotated and against a backdrop of black and white diagonals, the model’s legs and torso are flattened in a monochrome pattern, a grid that extends outwards to meet the geometries of the gallery with its corrugated beams, latticed stairwell and network of ceiling runners. Heavy projectors hang upside down from Lloyd’s signature suspension units, gravity-defying verticals another plane in the architectural grid.

The video images advance and recede gradually, and as they do there is time to enjoy their textures: the photograph appears to be from an old newspaper or magazine, dots from the original litho-print still visible in the digital scan.

Between dissolves are moments of pure grey. These pauses (as well as the deliberate placing of the apparatus in the middle of the room and at body height) invite me to explore the area between lens and wall. As I move through this empty stage my body casts shadows across the projection, my cropped silhouette in dialogue with Man's, re-configuring the space.

Through the ground floor gallery, six high-definition monitors are attached to more Unicol modules – these ones floor-standing, pairs of shiny metal legs in quirky robotic attitude. The screens are split, into two, three or many more parts, presenting offset views of variously: a tower, a magazine photo of a man wearing sunglasses, bridge girders and the silhouette of a female head.

As with Striped Man, the subjects here are less important than the abstractions they give rise to as the fractured images loop, pan and rotate in hypnotic beat. In contrast though, the pace is quick, striated; the works describe fleeting glances rather than lingering gazes, sounds of mechanical clicks and shutter releases perpetuating the rhythm.

The modules are positioned carefully, relating the videos to the specific architecture of the room and to the audience moving through it: The two monitors in Building are suspended high in the rafters inviting me to look past the video tiles to the glass ceiling beyond, where fragments of real city structures are superimposed in the panels. Each luminous screen is reflected in the polished concrete floor. To look between Sunglasses' two modules I need to turn 180 degrees, my body in perpendicular motion to the camera's vertical swings.

In this way Lloyd's installation functions as a system of parts: each object has its own pulse, its own meter; but together they actuate the space as a powerful audio-visual machine.