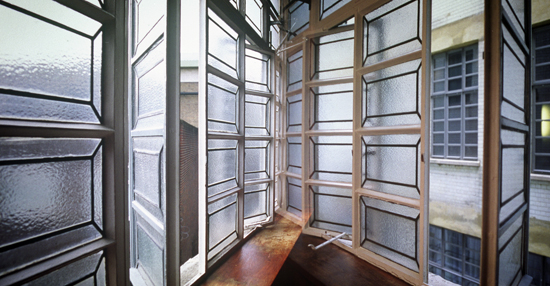 "On my first visit to the Town Hall Hotel I was instantly drawn to its glass and stained glass features. Through mirror-reflection and light play these features actuate the space and help bring about the fusion of old and new that is so integral to the site. Glass partitions and window panes reflect images of the hotel back onto itself: as I move through the building opening and closing glass-fronted doors, I see duplicate corridors appearing, rotating and disappearing again in their panels. Beams of light passing through windows cast lattice shadows on the carpets that flicker and fade as clouds move overhead. Edwardian geometries and chinks of coloured light are projected over walls in fleeting collages. Thresholds between spaces are momentarily blurred." 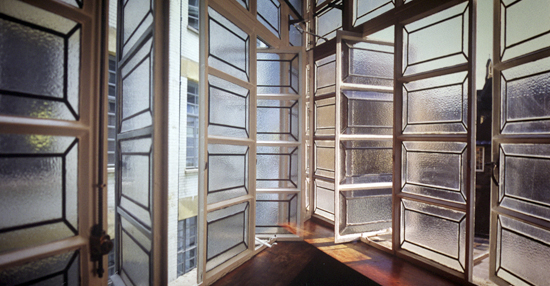 echo ek' ō, n (in pl) reverberations or repercussions; repetition; imitation; something that reminds one of something; a memory evoked

Through an experimental projection and re-capture process using 35mm slides and medium format film, photographs of art deco windows are combined to form new, ambiguous glass structures. Presented as large-scale lightboxes, the works project illusions of natural light into the Town Hall Hotel's basement corridor. Exploring the role of natural and electrical lighting in designed social spaces; the artificial environment of 'the hotel' where ...with their plants, reflective surfaces and curved columns, an illusory space, neither inside or outside is constructed**; and the material qualities of glass - as represented in the photographic images and in the lightbox objects themselves.

"Being mirror-reflective, glass reflects the mirror image of an observer, as well as the particular inside or outside world behind him, into the image of the space into which he is looking. Abstractly this reflectiveness of glass allow it to be a sign signifying, at the same time, the nature of the opposition between the two spaces and their common mediation. The glass in the window through its reflectiveness unites, and by its physical impenetrability separates inside and outside. Due to its reflective qualities, illumination within or without the space that the glass divides, produces either complex reflections, non-reflective transparency, or opacity."
**Dan Graham, Two-Way Mirror Power, 1999 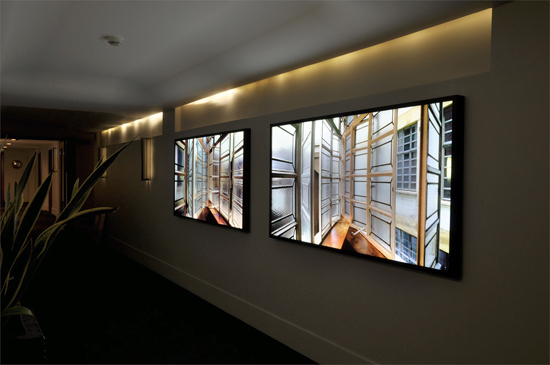